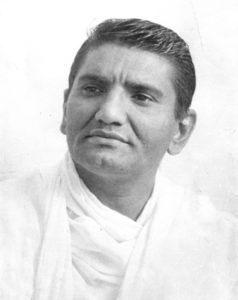 Baba Bhagavan Das was the Sad Guru of my teacher, Shri Brahmananda Sarasvati. When I travelled with my guru in the 1980’s and 90’s, whenever he spoke of his own teacher, his eyes would well up, and he would be filled with emotion, as he attempted to say something about the man he knew. It seemed that even saying his teacher’s name, sparked an inner fire that was made evident by his luminous eyes.

I noticed when speaking of his teacher, Shri Brahmananda Sarasvati was careful in expressing his words, so as to convey the level of respect and meaning Baba occupied for him. One day, after sharing a story of Baba, which revealed Baba’s infinite wisdom with the group, Shri Brahmananda Sarasvati gently closed his eyes, and dissolved into the meditative field of consciousness. In these moments, he invited us to follow his lead and venture out beyond the edges of our own mis-identification with our bodies and minds, into beingness, the realm of Baba.

In Sanskrit, there is a beautiful word called Avatāra. Avatāra means one who descends from pure light for the purpose of elevating. The Avatāras are holy beings that incarnate in form to help rid the world of suffering. I like to say it like this, Avatāras take form to help ease the suffering that is inevitable in the embodied growth process. Baba Bhagavan Das’ incarnation was an Avatāra, he is a reflection of spiritual light.

When I was in direct service, my teacher emphasized elements of the tradition. Many times he’d say, “Never visit a sage empty-handed. Always bring something, a fruit, flower, mantra and offer that with sincerity.”

Visit Baba Bhagavan Das in your own heart by offering a mantra in honor of his luminous light:

May the grace of Baba Bhagavan Das, the Avatāra, shower blessings on us all.