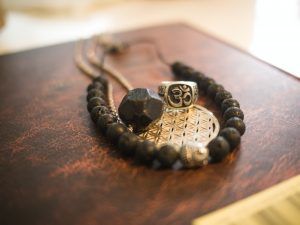 The Mandukya Upanishad is the shortest Upanishad consisting of just 12 verses. This Upanishad is associated with the Atharva Veda and is also considered fifth among the canon of the 108 principle Upanishads. The Mandukya Upanishad focuses on elucidating the topic OM (or AUM) and the three states of, waking, dreaming and deep sleep, as well as, discussing what is referred to as Turīya, the fourth.

OM is eternal existence, consciousness and bliss and this entire phenomenal universe including our body, mind, senses and the outer sense-perceived universe, is its manifestation, extension and expansion. The past present and future too are all nothing but OM, supreme consciousness. Whatever else exists beyond the three divisions of time, that also is indeed OM.

The seeker desirous to understand OM and Nada Yoga, should study the Mandukya Upanishad by chanting its verses, reading and contemplating their meanings and then sitting quietly and meditating on all that was brought to light.

I will now give commentary on the verse above. Verse 1 says that OM is made up of three elements, A + U + M. The unspoken code is that the three letters (AUM) also represent (A) existence, (U) consciousness and (M) bliss. On a manifest level, OM is both a sound, and a concept that reflects the whole of manifestation. In other words, OM is like a sutra in and of itself that signifies all things in the phenomenal world. ‘A’ representing the beginning of any phase in manifestation, ‘U’ the middle and ‘M’ the end. Moreover, everything within the manifest realm either contracts or expands. Therefore, OM is also called expansion and contraction. The body, mind and senses are manifested and move through the phenomenal world. These three (body, mind, senses) are also under what is called manifested OM.

The verse also calls OM, Tri-Kalatitam, which means beyond the three. In other words, OM is that which is within and beyond the three: A+U+M, or beginning, middle, end. In short describing OM as Tri-Kalatitam, means that OM exists beyond the realm of manifestation as well. By regularly chanting OM, you harmonize your body and mind with higher awareness and higher knowledge about the nature of all things expressed in phenomenon. You get a bonus, by regularly chanting OM, your consciousness evolves to become a place where higher wisdom and higher understanding of what you are beyond the three, i.e., beyond manifestation, becomes a reality. And you come to understand what the Mandukya Upanishad calls turīya, the fourth.